Hoot and I could hardly wait for the next weekend to arrive. Having completed the layout and installation of the cabin’s foundation piers the previous weekend, we had finally begun the actual construction of our cabin. Though we certainly considered this a significant achievement, the coming weekend’s activities would mark the beginning of an even greater milestone. If all went as planned with the setup of the beam lifting rig, we would have our first course of “logs” in place and be well on our way to bringing the cabin structure to life!

Much like the previous weekend (unfortunately for Hoot), this weekend’s work also began with the task of digging three-foot deep holes with a hand-operated post hole digger. In order to construct the beam lifting rig, it would be necessary to set a 20-foot cedar pole just inside each foundation pier at the four corners of the cabin. These four cedars would form the “frame” of our beam lifting rig and, along with some rope x-bracing, provide a solid structure from which to hang the block and tackle sets that would make it possible for Hoot and I to lift the large, heavy beams in place by hand.

Hoot takes a rest after a long day of digging holes and setting posts.

When the first hole was finished and it was time to sink a cedar post into it, we quickly realized how fortunate we were that my sister Jo and brother-in-law “Mr. P” had come to visit us this weekend – and that Mr. P was more than willing to give Hoot and I a hand with the cabin construction. Still very green, the cedars were quite heavy, so standing them upright and sliding them in the hole required the backs, legs, and arms of three old geezers, not just two. Without Mr. P’s help, I am fairly certain there would not have been enough of Granny’s Rheumatiz Medicine to help Hoot and I recover from this task! As it was, getting that fourth post tamped securely in the ground called for a short, celebratory break with our very cool friend Adolph Coors!

Taking a well deserved lunch break with our friend Adolph. (Photo by Lori B.)

After the break and some quick calculations, we began the final steps necessary to complete our lifting rig. First, we drilled holes and installed 12-inch long, half-inch diameter eye bolts through each cedar post at a height of 12 feet above finished pier grade. With eight-foot walls, the extra four feet of height would allow room for the length of the block and tackle and nylon straps when lifting the top row of beams. Finally, we braced the whole structure by tying half-inch diameter rope from just above each eye bolt down to the bottom of the cedar posts at each adjacent corner. This rigging of ropes formed a solid system of x-bracing that would keep the posts from bending or collapsing under the weight of the beams. Our lifting rig now complete, the moment of truth had arrived – and the time had come (finally!) to place our first beam!

Our beam lifting rig stands ready to go to work…

First, Hoot and I picked out a good, straight beam for this important, base course of “logs”, as they would virtually complete the foundation of the walls. Then, using the eight-foot pry bar and a cut-off piece from one of the pier posts to set up a small lever and fulcrum, Hoot raised one end of the ~800-pound beam while I looped a heavy, tow-rope around the end. With the tow-rope hooked to the trailer ball of my pickup, I drug the beam to the north wall of the cabin while Hoot guided its placement. 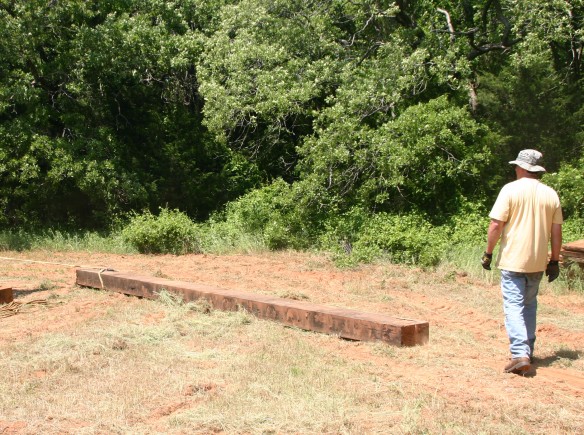 Hoot spots as I pull a beam in place with my pickup and tow-rope. (Photo by Lori B.)

Hoot grinds off the stubborn ring-shanked nails. (Photo by Lori B.)

With the tow-rope removed and the beam lying near the three foundation piers it would soon rest on, the next step was to prepare the beam for lifting in place. First, we had to remove all the old nails and spikes that had once helped it to form the old bridge. This was not an easy task, as each beam contained as many as 20, stubborn, six-inch long, heavy-duty ring-shanked nails that had not wanted to come out when we dismantled the bridge. Most beams also contained up to four, 12-inch long spikes that had been used to toe-nail the stringer beams to the main support beams. After breaking the claw on a three-foot crowbar while trying to remove one of the more stubborn ring-shanked nails, we finally decided to simply cut all these nails off with the grinder, and try not to get into them with the drill bit or chainsaw later on. Fortunately, though it was sometimes a struggle that required teamwork, we were able to remove all of the 12-inch spikes.

Removing the 12-inch spikes took some teamwork! (Photo by Lori B.)

After grinding and removing all the nails and spikes, the beam was finally ready for lifting into place. To accomplish this, Hoot and I once again utilized the lever and fulcrum principle with the pry-bar and post stump to lift each end of the beam and slip heavy, nylon slings around them. We then looped each end of the slings over the hooks of the block and tackle sets that were attached to the eye bolts of the lifting rig and prepared to lift the first beam. Would we have the strength to do this… just the two of us… by hand? Well, we would soon see!

Hoot uses the lever and fulcrum method to lift one end of a beam, while I slip a sling around it. (This photo by Lori. B gives a sneak peek at some later progress)

With our first beam cleaned of nails and spikes, securely cradled in the heavy, nylon slings, and attached to the block and tackle sets, the time had finally come to test our lifting rig – and our own strength! This next step in the process would be one of the most critical of all. If we were unsuccessful, the whole project would be in limbo until we could find another solution. And, with the exception of the front wall, there was not room in the meadow between the cabin and trees to let our pickups do our pulling for us – we would just HAVE to do this ourselves!

But the angst around these thoughts would not dampen our determination to succeed. We had anticipated this moment for nearly two months, and our spirits were high! With confidence, Hoot grabbed the rope of the block and tackle on one end of the beam and I took hold of the other. As Mr. P photographed this momentous event from the side (we would have welcomed his help but, for a true test, we had to do this alone), we looked at each other, nodded our heads and, on the count of three, reached high on the hauling lines and pulled with all our might.

At first, it seemed as if we were not gaining any ground, as our first tug seemed only to stretch the ropes taught. But, grabbing another hold on the hauling lines of the block and tackle sets and, once again rearing back with all our might, the beam began to slide across the red, Oklahoma dirt, finally slapping into the foundation piers as it cleared ground level. Just one more dose of blood, sweat, and tears, along with a little lead from a couple old country boy’s asses, and the first beam of our cabin-to-be sat firmly on its foundation! We had done it! But then, somehow, I just knew we would… and the transformation had begun… 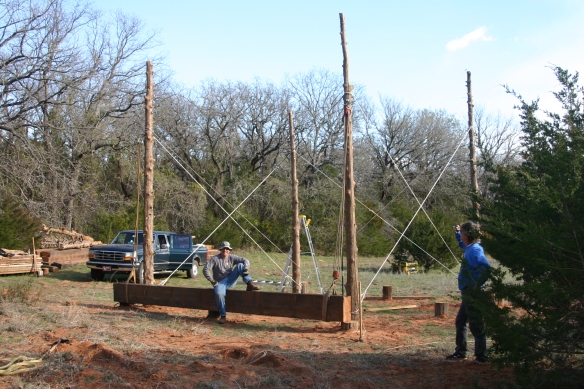 With Mr. P cheering him on from the side, Hoot sits proudly atop our first beam!

11 thoughts on “The Transformation Begins…”