It had been nearly a month since Hoot and I cut and hauled our cedar porch posts to the cabin site. This was mostly because the weather had not been very cooperative since then. The good thing about this short lull, is that it had given me time to draw out our design and research log cabin construction – particularly the poor-boy kind of construction, using lots of manual labor and hand tools. I knew there was no way we could manage the use of the kind of motorized equipment, such as a fork lift or small crane, it would take to raise and set the heavy beams. Neither of us owned or had access to such a rig, nor could we afford to rent the proper equipment for the length of time it would take to complete the walls of the cabin. No, we would have to build this cabin the pioneer way, or via some slightly more modern version of it at the very least.

The Internet can be a wonderful thing. Along with all the BS one is sure to encounter, it also provides a wealth of great information. In my research, I discovered the answer to all the lingering questions I had regarding design and construction of our log-cabin-to-be. In fact, most of my answers came from a site called “OurLogHouse.com“. It was on this site that I discovered the building technique best suited for the eight-inch by 16-inch by 20 foot beams – and for maximizing the use of every inch of those beams. Named the “butt-and-pass” method, it provides a way to construct a log cabin without the need for notching the ends of each log. Employing this method, logs are placed on the same level with one log “butting” the side of another at each corner. The log being butted, “passes” the butting log on its way to the far corner. For strength, each row of logs, or “course” is pinned to the course below with 1/2-inch steel re-bar, placed every two to four feet.

I also discovered on this site, the answer to the beam lifting problem. On the Building Techniques page, the words “There is a process that we will use that can be done by one person…” really caught my attention! This was exactly the kind of information I was looking for! One click took me to the Lifting The Logs page of OurLogHouse.com, and here I became joyously enlightened. The method described on this page entailed the use of a device called the “Block and Tackle” to raise the logs without the aid of machinery.

A diagram of the block and tackle. Courtesy OurLogHouse.com.

Greek mathematician and engineer Hero of Alexandria (Roman Egypt) first described and illustrated early block and tackle systems in his “book on raising heavy weights”. This device would be our savior, that I was sure of!

To utilize the block and tackle, Hoot and I would need to figure out some sort of method for attaching it at each end of a beam in order to lift the beam in place. Again, the answer to this dilemma came from the Lifting The Logs section of the website OurLogHouse.com. The method described and depicted here was advocated by the Log House Builders Association and put to use by Paul Kahle, whose photos of his lifting rig, to my fortune, were shared by the OurLogHouse website. Somebody once said, “A picture is worth a thousand words” and that was certainly the case here. Going with the design shown in the photo below, we would soon be setting the beams of our own cabin! All we needed now, was to get our hands on a couple sets of block and tackle. 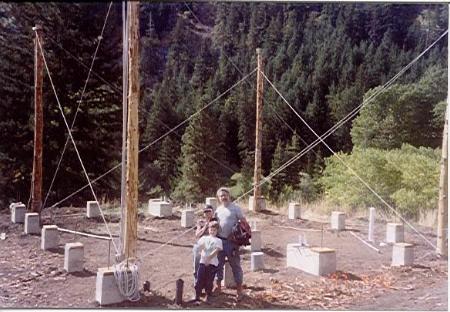 Paul Kahle’s block and tackle lifting rig. Photo courtesy of OurLogHouse.com. So that’s how you do it! Also shown is the “Pillar and Post” technique for forming the cabin’s foundation.

With questions answered concerning building and lifting techniques, I only had left to decide on a proper design for our cabin’s foundation. Those shown on the OurLogHouse.com website were of the “pillar and post” style. With this technique, concrete “pillars” are dug and poured at each corner of the cabin and every eight to ten feet in between. The tops of all the pillars are level with each other and the first course of logs is placed upon them and fastened with re-bar. Neither Hoot nor I were too keen on the idea of mixing enough concrete in a wheelbarrow, and hauling water to do so, to employ this method for our foundation. We would have to find a way that produced a similar, sturdy result, but with less work and expense.

The answer came in the form of a Time Life book I acquired from my sister Jo called “Cabins and Cottages”. In this book, the “poles and piers” method was described for foundation construction. Given the soil type and fairly shallow frost line at the cabin’s location, we decided on a variation of this method that eliminated the need to pour concrete. We would simply bury cut sections of power line poles three feet in the ground and level all the tops. These wooden pier posts would serve the same purpose as the concrete piers used by Paul Kahle and the good folks at OurLogHouse.com.

Hoot digs the first pier hole – right where Pythagoras and I have set our string line.

Before we could begin setting the piers, however, we first had to lay out the cabin’s perimeter. We accomplished this task using batten boards, string lines, and the Pythagorean Theorem to square the corners. Hoot’s first response to my description of this process was, “Pythaga who?!” To which I explained that the Pythagorean Theorem (a2 + b2 = c2) was a geometrical equation, developed by ancient Greek philosopher and mathematician Pythagoras, for determining the hypotenuse of a right triangle. Using this calculation in laying out the corners of the cabin, we could ensure the cabin’s foundation was square with the world. After this simple and clear explanation, Hoot suggested that “Pythaga Whatever-His-Name-Was” and I, should take care of laying out the foundation ourselves, and he would drive the stakes and dig the holes. This sounded like a good deal to me!

And so that is how we proceeded and, by the end of that first day of the weekend, we had the three pier posts of the cabin’s north wall set and cut to finish grade. We started this process by setting the pier post at the corner with the highest ground elevation first (the northeast corner of the cabin) and working our way westward down the north wall to the next corner pier. We cut the top of the first pier on a level line about 8 inches above the ground and then used a laser level set on top of this pier as a reference point from which to shoot the proper elevation for the other piers. Once marked for height with the laser, I penciled a level line around the circumference of each pier, and finished the process by cutting along this line with the chainsaw. As the sun began to creep below the trees on the west side of the meadow, I cannot describe the feeling of pride that came over us as we looked back at our accomplishment of that first, official day of cabin construction! 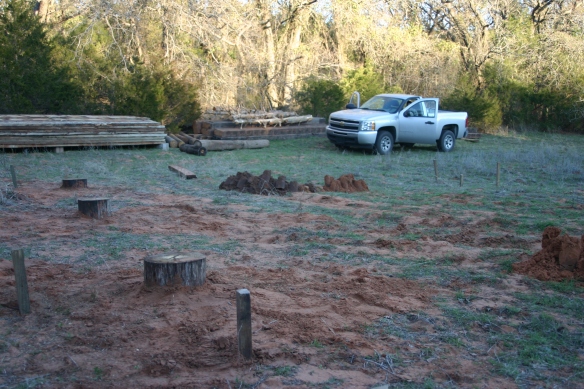 The next day, Hoot and I had only to repeat this process for the other three walls and center pier of the cabin. Pythagoras and I would lay out each pier location, and Sir Hoot would dig the holes. I did help with the back-filling and tamping of the pier holes – while Pythagoras looked on, waiting for the next corner. As each new pier was tamped in, Hoot would move to dig the next one while I shot a reference mark with the laser level, drew a level pencil line around the circumference, and cut the pier we had just buried to finish grade. Then I moved up to help Hoot tamp in the next pier, and the process began again. 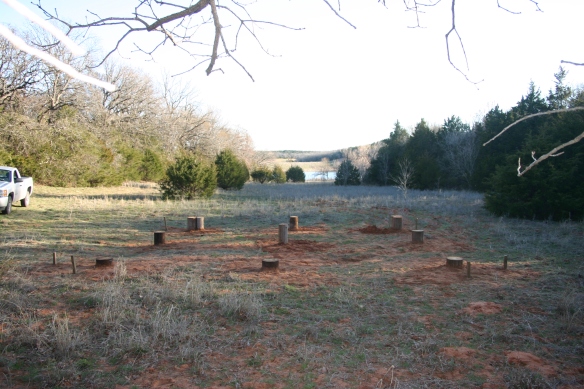 All the piers of the main cabin complete! Well, almost…

I must give Hoot credit for our efficiency throughout this entire project, beginning with this first process of establishing the cabin’s foundation. Efficiency of tasks and processes is Hoot’s livelihood, and he is damn good at it. Considering we were only a crew of two, efficiency had to be the name of the game if we were going to get this cabin livable in time for primitive fire arms season in late October. With the aid of Hoot’s expertise in this area, we had completed the layout and installation of all the foundation piers necessary for the main cabin structure by the end of our first weekend of actual cabin construction!

The only thing left undone at this point, was cutting the center pier to the proper elevation. But alas, Hoot’s chain saw decided to quit on us. Perhaps it had tired of hearing us boast about our efficiencies while it received no credit for its part. Whatever the reason, we were due for a couple shots of granny’s Rheumatiz Medicine by this time anyway. So, to hell with that miserable chain saw! Besides, Hoot and I had some celebrating to do while we admired our work and began to plan the next weekend’s task of constructing the beam lifting rig. Old Pythaga-What’s-His-Name would be proud, I thought – I know we were.

© From Creek to Cabin in 287 Days,2012, 2013. Unauthorized use and/or duplication of this material without express and written permission from this blog’s author and/or owner is strictly prohibited. Excerpts and links may be used, provided that full and clear credit is given to From Creek to Cabin in 287 Days at https://longhairedcountryboy.wordpress.com with appropriate and specific direction to the original content. This includes all written material and photographs.
Loading Comments...